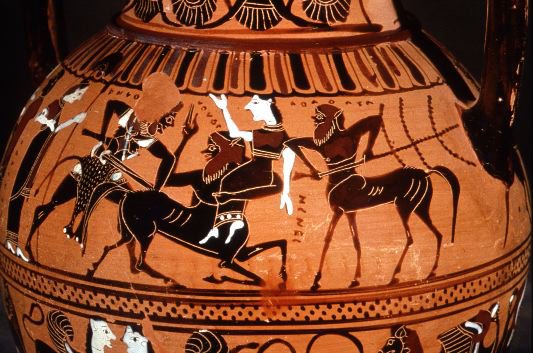 Places: Before a temporary abode of Heracles’s in Trachis

This play is one of piety and trust. It starts with Dêanira, the wife of Heracles. Dêanira is married to Heracles for a fair while and is not the happiest camper. Heracles is always somewhere else and them living in exile makes her bored and resentful.

It was prophesized to Dêanira that after 15 months of absence, Heracles would surely die.

After roughly this time, Lichas, a herald from the front, comes to Dêanira to bring tidings of Heracles and a mysterious girl. After much ado, it transpires that the girl is in fact Heracles concubine!

Dêanira, now a shamed wife decides to try one last-ditch effort to win back her husband’s affection. When she was just a child, a Centaur named Nessus had tried to rape her. It was Heracles who saved her by shooting Nessus with an arrow poisoned with Hydra venom. Upon dying, the Centaur in one last heinous act, tells naive Dêanira to take some of the blood from his mortal wound, store it carefully and use it if she ever needs a reassurance of her husband’s love.

This ominous gift is now what she applies to a robe to be given to Heracles. Lichas is swiftly away with it.

But oh! Soon Dêanira realizes her mistake, had not the tincture ruined her cobblestones. It isn’t a love enhancer at all, it is a deadly poison.

Hyllus, Dêanira and Heracles son, comes back from the war to curse at his mother - she has made sick her husband! Hyllus was so enraged, he killed Lichas.

Dêanira in her distress decides the only way is death. She kills herself right then and there. At this point, Hyllus has understood the innocence with which his mother has done the deed and is weeping for her.

Heracles, now writhing in pain, is brought home where he meets Hyllus who tells him of his wife’s fate. After initial outrage, Heracles listens to the Nessus story and is aghast because he had a prophesy of his own. It was foretold to him that he would die by a dead one’s hand and here it is, his death so close.

To prevent the curse to transfer to his son, Heracles asks that Hyllus burns him on a sacred pyre and marries Iolè, his concubine.

Reluctantly, Hyllus agrees and it is done. The moral of the story seems to be that you can’t escape your destiny (also, don’t trust Centaurs.)