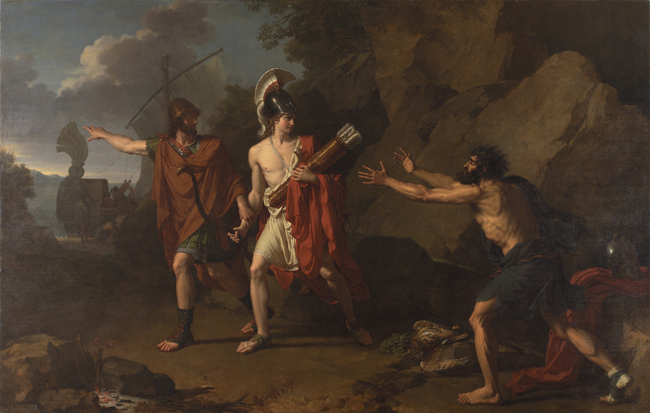 Place: The uninhabited island of Lemnos

This play from Sophocles needs a bit of a preview to understand what’s going on. Philoctetes, our main player, is in agony. He was bitten by a Hydra and if a magical creature bites you, there is little that can be done. Philoctetes is understandably not the most fun person to have around and Odysseus decides that it is easier to abandon this crying mess on a lonely island.

However, Philoctetes was just anybody. He was the only one who helped Heracles when he was in agony from his poison (see the play of Electra) and thus received Heracles bow and arrow. Heracles’ bow had the useful skill to never miss its target.

Turns out, to win the Trojan war, Odysseus needs this very bow - probably shouldn’t have abandoned the owner?!

We start out our story with Odysseus and Neoptolemus, son of Achilles, sailing towards Lemnos to retrieve the Heraclian bow. Odysseus is aware that Philoctetes will not give over the bow easily after being wronged by him, so he attempts to get Neoptolemus to lie and sweet talk Philoctetes, so that he may give his bow to him willingly (Odysseus is aware that if Philoctetes understands who he is given his magic weapon to, he will kill Odysseus.)

Neoptolemus and the mariners get to Lemnos and find Philoctetes in a pitiful state. Due to his injury, Philoctetes used the bow to shoot birds out of the sky and this is how he has fed himself.

Eventually, Neoptolemus wants to leave but Philoctetes wants passage back to his home town - just in that moment, a fit of pain takes Philoctetes and he passes out. He had just enough time to ask Neoptolemus to promise he that he will stay and take him when he is better again. Neoptolemus had agreed but when Philoctetes passes out, he takes the bow and is about to leave - but oh, he is troubled now. Without the bow Philoctetes will die of starvation. He lingers.

Odysseus isn’t a patient man and comes back to check out what’s taking so long. Philoctetes wakes up and is pissed to see his archenemy. Odysseus, ever the charmer, wants to just leave and let Philoctetes die. Neoptolemus, now owning a spine, refuses to leave the injured man behind and threatens Odysseus with a fight. He gives Philoctetes his bow back but halts him from killing Odysseus.

Neoptolemus then tells Philoctetes about the prophecy, that he is needed to win the war and that he may get healed if he goes.

Philoctetes has zero interest in helping his enemies after how they treated him. Neoptolemus is sad but decides to keep his promise and take Philoctetes to his home shore regardless.

Suddenly, the sky opens up and Heracles his there! Piety is a virtue to all involved and they listen dutifully to what Heracles has to say.

Heracles tells Philoctetes that he is destined to go join the war effort and that he will be the one to kill Paris (the person who orchestrated his abandonment) and capture the whole city of Troy. Philoctetes is also promised healing for his wounds if he dedicates all his victories to Heracles.

Of course, all will obey and they are off to live out their destinies.

“Thou whom I have longed to see,

Thy dear voice is law to me.”