Odysseus likewise, is portrayed as both foolhardy and cruel. 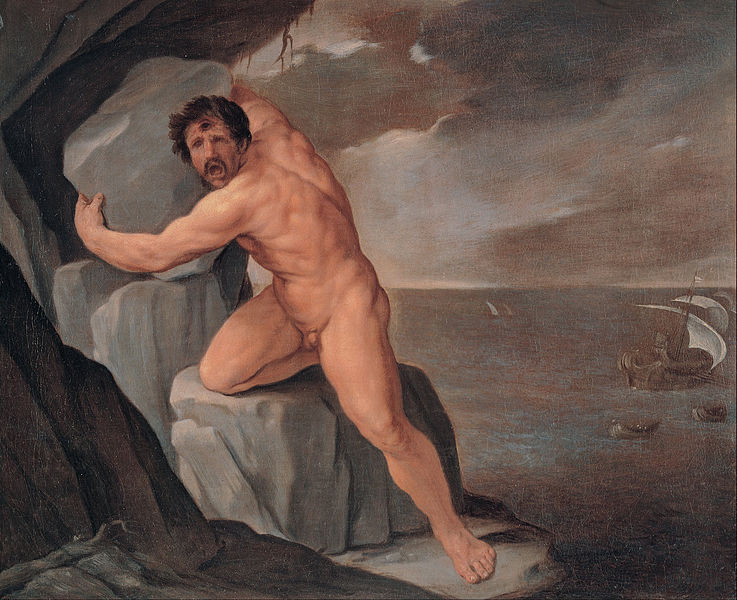 The son of Poseidon and nymph Thoosa lounges on the rocky shores, gigantic limbs outstretched. A sound alerts him, but it is not any of his sheep. Standing up, he blinks his single eye: someone has dared to come ashore the Cyclops’ Kingdom! Hurriedly, he follows the band of intruders; they have invaded his cave. He takes a big stone, ushers his flock into the cave, and seals it from inside.

As a price for their intrusion, he eats two men. Polyphemus inquires on the captain’s name. “No one”, says Odysseus. No one then offers him strong wine and soon, the giant is passed out drunk.

Meanwhile, Odysseus takes a wooden staff and rams it into the Cyclops’ eye. Polyphemus cries in agony and the other Cyclopes come running.

Polyphemus tells them, and they assume the gods have afflicted him with this and tell him to pray.

In the morning when Polyphemus, now blinded, lets his sheep out of the cave to graze, Odysseus and his crew grab hold of the undersides of the flock and are so let out to freedom.

In his jubilation, Odysseus yells to the giant, who stands enraged with the bloody wound in his head, what his real name is. Polyphemus in frustration heaves a huge boulder and prays towards his father to avenge him.

He throws the boulder and despite his blindness, only barely misses Odysseus’ ship.

“Hardly had he spoken, when we saw the pastor Polyphemus moving himself in a great mass among his flocks and seeking the well-known beach – a horrible monster, deformed, huge, whose eye had been taken. A broken pine guided his hand and firmed his step, while his woolly sheep kept him company; that was his one pleasure, the one solace in his suffering.”