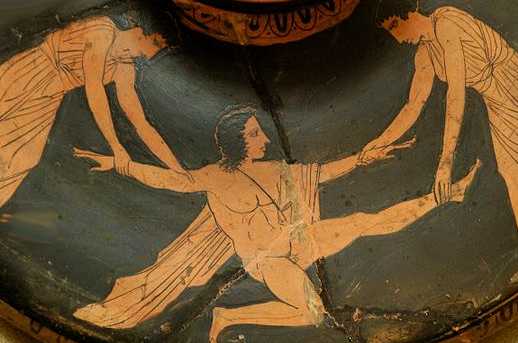 The god Dionysus, also known as Bacchus, is come and describes his background. He is Zeus’ son but rumors abound in Thebes, his mother’s birthplace, that he is but the son of a mortal. In anger, he has turned all the disbelieving women of Thebes into frenzied Bacchants, dancing in the mountains to his tune.
In Thebes rules king Pentheus, son of Cadmus. He is cousin to Dionysus, but believes the rumors of his inferior birth. Dionysus is determined to show that he is who he says he is.

“Therefore I will demonstrate to him, and to all Thebes, that I am a god.”

A seer, Teiresias, has come to meet his friend Cadmus. The two want to give libations to Dionysus. Meanwhile, Pentheus has captured some of the women, but many, including his mother Agauē, are still on the loose. He has heard of an oriental wizard who entices young women to Bacchism. Pentheus plans to behead this man - he is also cross with his father and Teiresias.

“Listen: your grey hairs are your protection; otherwise you’d be sitting now in prison with all these crazy females, for promoting pernicious practices.”

In time, a guard has found Dionysus and is presenting his to Pentheus. The guard tells Pentheus about the ease of capture, and the vanishing of the captured women when Dionysus wanted it, he warns Pentheus, just as his father and the seer did.

When questioning Dionysus goes nowhere, the god himself warns Pentheus to see reason, and then there is an earthquake and the palace crumbles. With Pentheus still ignorant, a herdsman from the mountains comes to give further proof of Dionysus power - the crazed women have attack the cattle and torn it to pieces.

Even now, Pentheus is only intrigued but not changed. He wants to see the women and their display for himself. Dionysus agrees to lead him there. His drag to disguise himself, the two make for the mountains.

Soon, a messenger comes to the palace. Pentheus, he reports, is dead. When Pentheus and Dionysus went to the mountains, Dionysus made Pentheus climb a pine tree, and when the women heard Dionysus call out that the woman in the tree is in fact a man and here to spy on their sacred dances, they attacked the tree, had Pentheus fall to the ground and be mutilated by the assembled.

“Women, here is the man who made a mock of you, and me, and of my holy rites. Now punish him.”

Eventually, Agauē appears at the palace with her son’s head in her hands - she does not know him, she thinks she is carrying a lions’ head.

Cadmus, anguished by what his daughter has done, slowly makes her see the truth. When Agauē realizes what she has done, she is rightly shocked and quickly begins funeral rites.

Dionysus now comes to pass judgement on them all. Agauē and her sister will be exiled forever. Cadmus and his wife will be turned into snakes, they will roam the land and destroy many places, but eventually, they will ascend to immortal life.
Father and daughter depart in sorrow to face their respective fate.

“Poor child! I cannot tell how you can fare well; yet I say, Farewell!”