“For nothing has power to break the binding laws of eternity.”

In this book, Lucretius goes all in to explain the very nature of the universe. Not to be too cheery however, he informs us straight up, that the world is doomed because reality isn’t divine but natural. We shouldn’t be sad that divinity in’t real however, because divinity is nonsensical since it relies on gratitude and gratitude towards divinity is useless when it comes from non-divine entities (humans). He sums this up thusly:

“What harm would it have done us to have remained uncreated?”

“Elements all consist of bodies that are neither birthless nor deathless, we must believe the same of the world as a whole.”

With this complicated concept, Lucretius starts us off on the idea that objects that are born and die mirror the earthly and heavenly objects. He is speaking of fire, air, water and wind. Lucretius extrapolates that since those objects have a semblance of a beginning and an end, so must Earth and other planets and stars.

“The world is newly made.”

Three things are everlasting: - I. Atoms - II. Empty Space - III. Nothingness (he does not elaborate on this one)

Everything else is subject to birth and decay.

It should be noted that Lucretius assumes humans were present when the world began.

“Stages by which the initial concentration of matter laid the foundations of earth and sky.”

Initially, many atoms floated through infinite time and clashed together to make all the things. To start, earth particles were made, because they were heavy. The first element was ether, generated by fire. This element appears to be the highest up. This fiery ether, Lucretius confidently asserts, triggered then the birth of the sun and the moon domiciled in middling height in the sky. The still fragile surface of the earth newly made, suddenly caved in and voilà! The sea is made. The fiery ether and sun would now, slowly but surly make the earth shrink by making it atomically more compact. This shrinkage also caused a deepening of crags that create deeper oceans and an overlapping that creates mountains.

To provide some more visual clarity, I have attempted a simplistic figure (with Paint, because we are already talking about ancient things here.) 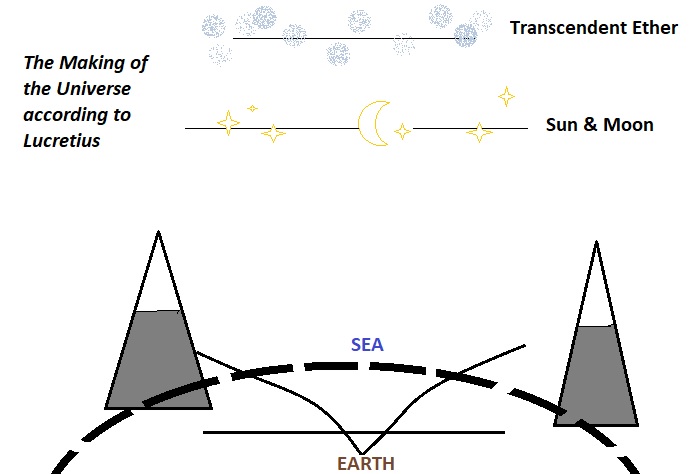 “The cause of stellar movements.”

Lucretius admits to not being too clear on this one. He proposes two ideas:

“How does the earth remain fixed in the middle of the world?”

He explains that the earth thins out by virtue of air dissolving it…I must admit that this time, I am stumped where he is going with this.

In a feat of otherworldly logic, Lucretius explains casually that the sun and the moon too are sharp to our vision and that this clearly explains that their size is exactly as it appears to our senses. For those skeptical, he smoothly reasons that the sun is still able to heat and light the entire earth, because all atoms are born from it and because the fires within the sun light the air around it to extend its range.

“Movement of the sun and how the moon only needs one month to travel when the sun needs a whole year.”

Lucretius is completely stumped on this one and thus does the sensible thing and looks to other scholars.

from Democritus = The nearer an object to earth, the lesser it is caught by the vortex of the heavens; it follows that the moon is closer to the earth and thus has a quicker trip. (It is noteworthy that in terms of height, Democritus assumes that the stars are on top, the sun in the middle and the moon on the bottom of the heavenly object ladder.)

from Lucretius = Two cross-currents of air - which originate from the stars, blow through the sky and alternate by season. One of those currents blows the sun to wintery regions at midwinter, while the second reverses it. The same happens to the moon and the planets.

He goes on to site many other ideas brought forth by scholars and cultures. For most he is somewhere between dismissive and indifferent. My favourite is the one in which the moon has its own personal mini sun. It should be of interest, that Lucretius specifically calls out the Chaldean (Pre-Babylonian) cosmology and their conflict with astronomers.

“The first things to be created.”

This is essentially the “…and then there was light.” of the whole story. Lucretius uses logic to get from A to B but his poetic colouration of the matter still reads eerily like a sacred text.

First, there were to be herbs and shrubbery. Then trees and soon mortal creatures. Those creatures come directly from the soil like plants, fed alike by moisture and sun. The first creatures were winged birds, derived from soil-grown eggs. Then mammals emerged from spontaneous wombs connected to the earth by roots. When the embryo was ripe, it set forth gasping for air and the soil generated milk for it to drink and moss for it to be comfortable. The mammalian child was not cold, for cold had not been created yet.

The earth also attempted to create monsters. Hermaphrodites, creatures without feet or hands, mouthless idiots, the blind, those with too many limbs… all those were produced but all in vain (presumably because they were infertile).

“Many species must have died early on.”

Lucretius is matter-of-factly here. All the creatures currently in attendance are either the fittest of their kind (the most cunning, the speediest or those with the most prowess) or of use to humans.

Because we keep certain creatures alive for our useage, those livestock animals like us, for our care.

Admittedly, this title was of my own creation. Lucretius quickly points out why centaurs and other such creatures are not just not real but impossible.

He explains wisely that such opposing life forms as a human and a horse cannot be, because their maturity differs. A horse is old when a human has just entered their prime.

Early humans were much tougher than current ones. They were bigger, more solidly boned, dealt better with exposure, adverse diets and illness. The reason for this was their coming from good soil rather than other humans. These humans were also content and primitive.

They ate acorns and Arbutus berries (native to the Mediterraneans) which were larger than those today. They did not know of fire and did not wear animal skins. They mustn’t have known the common good, the law or morals. They hunted with rocks and clubs.

They died easily because they knew no medicine but also didn’t die in droves because they fought no wars and built no ships.

After all those wild assumptions, Lucretius closes sullenly that early humans might die of starvation while current humans die of gluttony.

Later on, humans build huts and tamed fire. Men and women - naturally wild, lived together and had their temper tamed by the need to raise babes and thus too, neighbours formed mutual alliances.

Now Lucretius tells us of the customary blahblah that women are weak.

Those middle-aged (by Lucretius’s timeline) humans soon developed spoken language for their convenience.

Even later still, kings started to form cities. Land and livestock were parceled out to those with the most strength and best looks.

Soon however, the fit and attractive lost their riches to those that found gold and obtained property.

Naturally, they should have been better Epicureans and be content with philosophy since riches cause envy.

It follows, that soon kings were killed, kingdoms fell and all went back to anarchy until some made law and order.

“Where does religion come from?”

Those who believe in gods are not pious but those who contemplate the universe are!

“The discovery of iron, lead, copper and silver.”

When fires consumed forests, the melted material trickled into the earth and formed gold, silver, lead and copper.

Copper melted better, so it was more useful to humans initially than fragile gold. Those roles have reversed (in Lucretius’s time). Iron is the new (useful) copper, but copper came first because it is more plentiful.

Lucretius now goes into specifics about what weapons of war and war practices were developed in what order but all that is really important from this section is the advice to not go to war with lions.

Plaited clothes came before woven clothes. Woven clothes also needed to wait for the discovery of iron, because iron is needed to make looms.

He now explains that initially men made clothing - his reasoning is of course, because men are amazing and women mediocre at best. (But men ended up having better things to do.)

“Sowing and grafting of plants.”

“Singing and the arts.”

In his last subject for this book, Lucretius tells us that early humans couldn’t hold a tune and thus imitated birds. The invention of letters too was instrumental because all knowledge from before is just inference. True that.