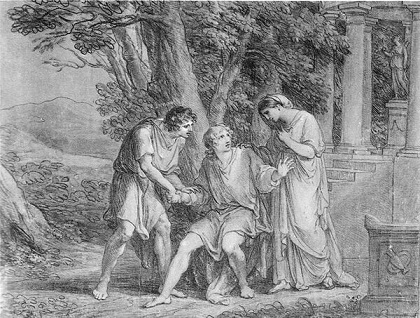 Iphigenia is introducing herself: she, the daughter of Agamemnon, was meant to be sacrificed to Artemis on her father’s behalf. The goddess has saved her with deception and she has been send to Tauris, ruled by Thoas, to serve there as priestess of Artemis’ temple. By Taurian custom, any foreigner who dares to step foot on its coast will be sacrificed to the goddess of the hunt.

Iphigenia has a dream concerning the death of her brother, Orestes.

Meanwhile, Orestes and his cousin and best friend Pylades have been exiled from Athens and send on a mission to redeem themselves: they must find the statue of Artemis and bring it back home.
They arrive on the coast of Tauris and decide to hide in a cave, until the night, to find a way into the temple.

“Bold is the word! We’re young, and danger’s no excuse.”

Iphigenia has called on her attending women, the captured Greeks, to come weep with her for her brother, which she thinks dead. Soon, a herdsman comes and reports the sighting of two foreigners. His follow herdsmen and him have attacked the men and captured them to be sacrificed.

When the two strangers are brought before Iphigenia, she asks them for their names and origins. Orestes is reluctant - he knows the laws of this land and wants to die swiftly, without disclosing his bloodline. Eventually, Iphigenia gets some information from him, and when he realizes their home, she asks pointed questions. She soon learns of Agamemnon’s brutal death and grieves for him.

Moved deeply, Iphigenia has an idea: she will release one stranger to bring a letter back to her home country and her friends, and sacrifice the other in his stead. Of course, Orestes will not sacrifice his friend and offers himself instead.

Iphigenia accepts and Orestes grieves that his late sister will not give him the proper funeral rites. Iphigenia is willing to help him and promises to administer all the proper libations. Once Iphigenia leaves to prepare for the offering, Orestes and Pylades talk about the unusual happenings. Orestes is prepared to die but Pylades has hope.

When Iphigenia returns, she promises Pylades safe passage but wants him to swear that he will deliver the letter. In case his ship sinks but he survives, she decides to recite the message in the letter to him, so he may be able to deliver it orally. In her recitation, she names herself and Orestes and shocks the two of them. Pylades was right!

“Orestes, look! From your own sister I deliver you this letter.”

Iphigenia does not believe, she wants her supposed brother to prove his identity with knowledge of their family. He proves it and they are overjoyed!

Now however, they all must flee. They devise a plan: Iphigenia will say that Orestes is impure. He has committed matricide, Pylades has helped and then touched the sacred statue of Artemis. All need to be cleansed in the ocean.

Promptly, Iphigenia meets king Thoas in the temple to tell her high tale.

She is very convincing, even managing to keep them undisturbed in their business. The Greek women who heard the plan swear themselves to secrecy.

Once they are gone, a messenger arrives and reports the fraud. Swiftly, Thoas wants to send his guards to recapture the escapees. Just in that time, Athena, the goddess of justice and wisdom, appears to Thoas and Orestes too and tells the former to leave the three be, for their escape is just and to release the Greek women to their home. To Orestes she commands that he may erect a temple to Artemis in Halae (where he is headed) and that Iphigenia shall be the priestess there. All agree and it is done.