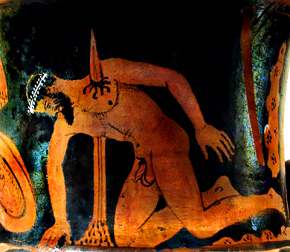 Places: Troad and somewhere beyond Rhoeteum - both in modern-day Turkey

Time: Towards the end of the Trojan War

The story begins at the end of the Trojan War - Achilles has died in battle, he was, until his death, the greatest warrior in all the war. His armour is collected by Agamemnon, the Spartan King and his brother Menelaus, the General of the army and given to… Odysseus. It should be understood that Odysseus was not the second-greatest warrior, but deemed instead the wisest; it is important to remember this for later. Technically the second-greatest warrior was Aias and he is not amused about being overlooked.

In true warrior fashion, Aias rages enough to make a plan to kill Odysseus. He is about to hack Odysseus to pieces when Athena, the goddess of wisdom and war, decides that Aias is without just cause and strikes him with madness.

Aias is turned blind towards his target and instead starts slaying the sheep and cattle - loot from the war, in what must have been a bloody massacre because people are outraged!

Now in many places we get the opinions of the Chorus. That appears to be a collective of opinionated bystanders, possibly in our head, definitely narrating. The Chorus is initially on Aias’s side.

We now meet Tecmessa. She is Aias’s wife and the mother of his son, herself a trophy of war. For some reason, she is devoted to Aias and scared for him.

Tecmessa is also scared for herself. Having already been captured once, she fears that Aias going mad and even him coming to himself again is a double whammy for her. First her name is slandered and then she gets but a broken man. She can not catch a break.

The Chorus is moved by Tecmessa’s plight and decides to talk to Aias himself.

Aias is inconsolable! His valour! He clearly is hated by the gods!

No matter what the Chorus is saying, Aias won’t be calmed.

Aias decides death is better than shame. He listens not to Tecmessa’s plea toward reconsideration. Has he forgotten about his son? His parents? Her?!

He hasn’t, he just doesn’t feel like he can live with this lack of reverence.

Before he lives to end his misery, he appoints his half-brother Teucer as a ward to his son.

Then, a messenger arrives.

He has bad news, a seer has predicted that Aias will die - oh.

Tecmessa and the Chorus decide to go after Aias; perhaps there is something they can do?

Aias has killed himself in cruel fashion and Tecmessa and Chorus are majorly pissed at the gods now.

Teucer finally shows up. He is pissed. Shit’s about to go done!

Menelaus joins the party. He was the General leading the Trojan army, he is none to pleased with Aias or anyone for that matter. When he and Teucer meet, the war-of-words ensues concerning what is to be done with Aias body. Note: This dialogue on p.75 is the best part of the whole play!

Menelaus wants Aias to be eaten by birds. Teucer think Menelaus is off his rocker. General or not, after Teucer threatens a fight to the death over the matter, Menelaus shirks away and leaves.

Having won this argument, Teucer is ready to prepare for the burial. Tecmessa and her son stand vigil and the Chorus guards.

Teucer is back quickly, he has spotted Agamemnon!

Agamemnon is the King of Sparta and Menelaus’s brother. He is also mighty arrogant.

A burial for someone who was barely more than a slave? Ha! Says Agamemnon. Nevermind he comes from barbarian stock himself, Teucer reminds him. Things get heated and Teucer, true to form, offers another fight.

What’s going on? Why is everyone in such a huff? Odysseus is a level-headed dude.

After the situation is explained to him, he pleads his own case, asking Agamemnon to remember their friendship.

Agamemnon thinks of Odysseus as a peer, so he listens.

Odysseus sees this whole letting-a-corpse-rot-outside as a bit much… Agamemnon needs to remember that the gods are easily angered. It is is pious duty to bury the dead.

Agamemnon is having none of it, he doesn’t want to look weak by burying a foe!

A foe who was a great man, Odysseus argues.

Odysseus warns him that the people love the righteous more than the ungentle and by people he means himself. Ok, fine! Agamemnon reluctantly agrees and Odysseus goes to offer his help to Teucer in burying Aias.

Teucer is stunned. Odysseus is THE MAN, y’all! While the brothers were but heartless quibblers, Odysseus of all people speaks wisely.

Aias is buried with all the valour a warrior wants and everyone is just that little bit wiser.

“Oft we know no till we see.

Judge not, till the hour have taught thee

What the destinies have brought thee.”