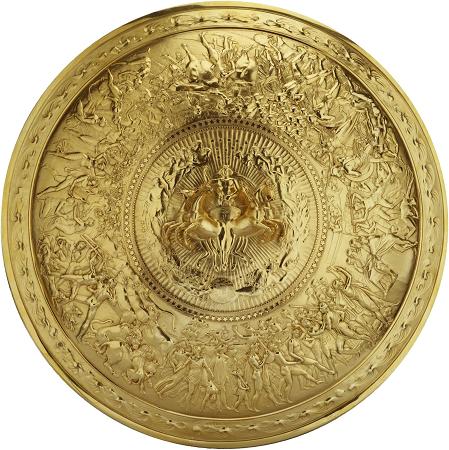 The Voice of Reason

Apollo, the god of healing and truth, is punished by Zeus for killing the Cyclops. Apollo had reason for his anger - Zeus killed his son! Nevertheless, he is now to live as a mortal craftsman in Thessaly. Thessaly’s minor kingdom Pherae is ruled by Admetus, a just king, who has befriended Apollo.

When Admetus is fated to die, Apollo bargains with Death for his release in lieu of a willing replacement. Admetus asks his aging father and mother but they both refuse. His loyal wife, Alcestis however, commits herself in his stead.

When Death comes for Alcestis and finds Apollo, he is outraged. Does Apollo want to rob him of another just sacrifice? Apollo indeed tries to argue with Death that he could just as well wait until he is aged, but Death refuses. Apollo, unused to being refused, sends for a hero who shall match Death in its harshness.

The Chorus of Pheraean citizens wonders if Alcestis is really fated to die. Would Admetus really sacrifice his loving wife? They tell the tale of Alcestis getting ready for her death, how she washed and preened, how she wept on her marriage bed and how she, ever the gracious woman, said tearful goodbyes to her children and servants.

All she wants before she passes, is to see the golden sunlight one last time. Admetus obligingly leads his dying wife outside. Alcestis now dying asks of her husband but one thing: he shall never remarry, for the sake of their children. Admetus agrees gravely - he is distraught.

“One who is dead is nothing. Time will soften pain.”

Once Alcestis has died, Admetus orders her funeral rites. Shorn heads and cut manes, sombre dress and 12 months with no music. The kingdom in mourning.

Meanwhile, Heracles, divine hero and son of Zeus, comes to the Pheraean court. He is on a quest to take back the wild mares of Diomede for the king of Tiryns.

Admetus is friends to Heracles too, and bids him hello. When Heracles first sees Admetus’ shorn head, he assumes a death has occurred and turns away to find another host, but Admetus, not wanting to have another sad event, assures Heracles that he is most welcome and hides smoothly the real story of who has died. It is against custom to have guests when a household is in mourning, so a white lie is necessary.

Admetus now commences the funeral - but there, is father Pheres arrives. Pheres is not welcome - he who refused to die for his son, even though he is aged! Pheres too is outraged: why would he need to die for his son? Is his life less valuable because it is longer? Threats are exchanged and eventually, Pheres is kicked out and leaves.

A servant assigned to Heracles laments the same’s manners. Heracles, not knowing the state of the household, has feasted and made merry. The servant realizes Heracles ignorance of what had occurred and fills him in on Alcestis’ death.

Heracles is stunned! Admetus received him against custom - what a friend indeed! He swears to repay Admetus with the one thing he desires most.

When Admetus arrives back from the funeral, he is in the throws of grief and anguish. Never should he have exchange his wife’ life for his, how can he go on without her?
Heracles has come too and with him is a veiled woman.

Heracles urges Admetus to talk about taking another wife - won’t he find a new one? Admetus however, is steadfast. Alcestis will be the only one to share his bed. Heracles drops the subject and asks Admetus to watch the mysterious woman for him - he has to go on his quest and if he does not return, she shall stay in Admetus’ household.

Admetus is most reluctant. The stranger has the height and body of his deceased wife and his grief is too fresh. After much pushing by Heracles, he agrees. He turns his head away and extends his hand to the woman and upon touching… it is Alcestis! But how?

Heracles explains that he had gone to battle with death - he won and took Alcestis back. It will be three days and she will talk again, purified.

Heracles leaves for his quest, Admetus rejoiced and the Pheraeans light all the fires to the gods.