Something a bit different. In light of the current pandemic, I thought it would be interesting to review how pandemics were progressing and recorded in olden times. This is concerning the Great Plague of London in 1665, cause by a bacterium, Yersinia pestis. 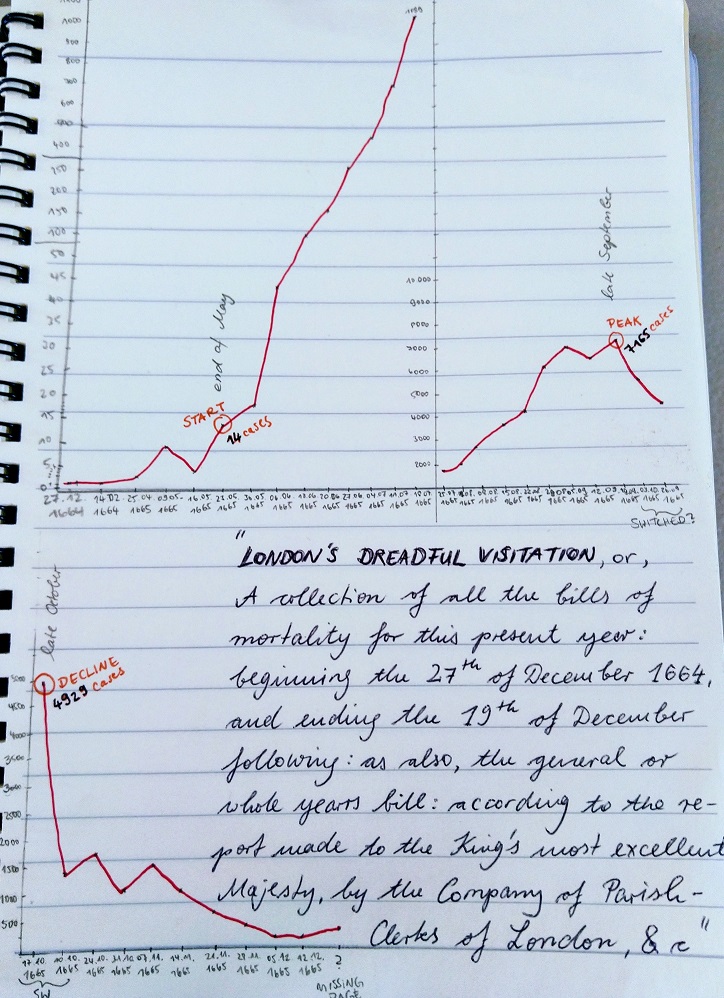 The second part of the diagram shows the peak as it was recorded here, with 7165 deaths in late September 1665. By late October, there’s a recline, with 4929 deaths recorded.

Problematically, these are most certainly not the real numbers of death at the time. Reasons are plentiful:

It must be assumed that the real number of deaths during this time is around 100.000.

All Other Causes of Death in London’s Dreadful Visitation

(and a quick explanation of the most curious ones)

Chrisomes = Child dead in its first month of life

Griping in the Guts = Abdominal Cramps

Infants = Yet unable to Speak

Overlaid = Crushed (likely a baby by an adult)

Plurisie = Inflammation of the Lungs

Purples = Blood underneath the Skin

Rising of the Lights = Croup

Sciatica = Pain in the Hip & Back (death by treatment?)

Spotted Feaver = Either Typhus or Meningitis

Strangury = Inability to Urinate (symptom for UTI’s or Kidney Issues)

Stopping of the Stomach = Tenesmus (inability to vacate bowels)

Surfeit = Excess of - unclear what the excess was here

Teeth = Possibly death during teething in an infant

Timpany = Bloating of the Digestive Tract

Wen = Abnormal Growth on the Skin